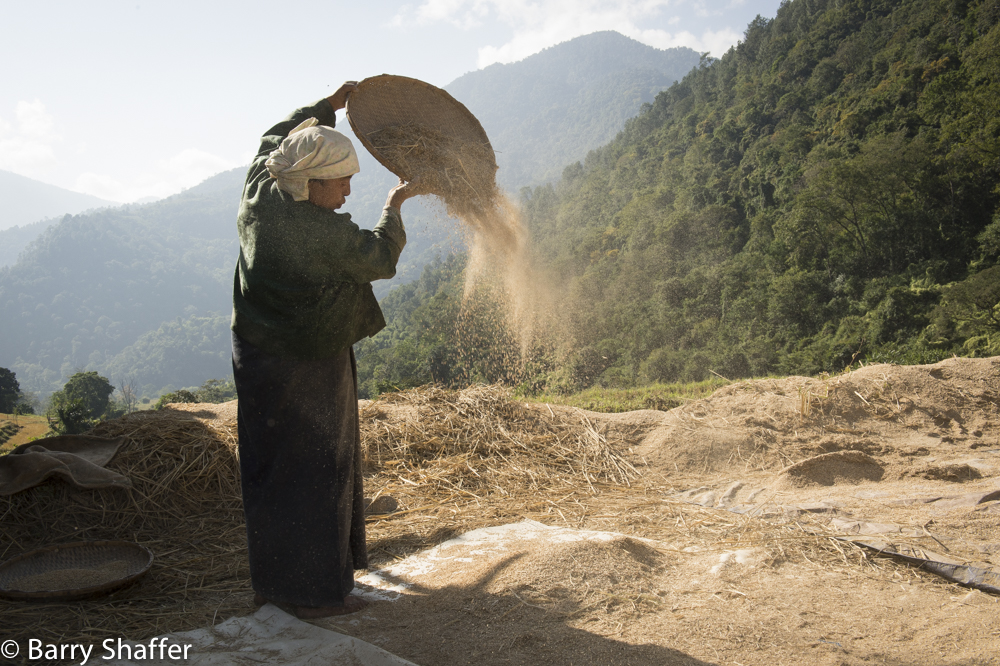 We began our ten hour drive to Bumthang early in the morning.  Nima was sad to see us go and after we walked out she was almost in tears.  After about an hour of driving, we pulled over to watch three ladies shaking dust off of barley grains.

We drove for what seemed like forever, snaking higher and higher up into the Himalayas.  As we climbed in elevation, the vegetation became dense and green and the clouds hung thick over the tops of the mountains.  We began to see snow in the distance.  When the valley beneath us was no longer visible, our guide Jigme Reegyal informed us that we were driving along the most dangerous cliff in Bhutan.  All along the road we saw white flags erected to honor the people who had died there.  “If you fall here, your body will never be recovered.”  As we rounded a corner we saw two large buses and Pemba slammed on his brakes.  As the road was not large enough for a van and a bus to pass each other Pemba threw the van in reverse and proceeded to drive backwards–I repeat, backwards–along the most dangerous road in Bhutan.  I knew, however, that if I could trust my life in anyone’s hands they were Pemba’s.

We eventually found a place to pull off of the road and the busses drove past, their riders waving and smiling at us.  I will say that my favorite thing about Bhutan so far is the warmness with which people here greet us as we drive past them.  They seem simultaneously amused and excited to see tourists in such remote parts of their country.  We passed a group of high school students doing road work and one of the boys put down his shovel to bow as we passed.

We stopped in Seng Khor, where Jigme had arranged to have lunch waiting for us.  I finished early and took a walk around the village.  I came upon a four year old girl who shouted “hello” in english and ran to get her older sister.  Her sister ran up to me and told me her and her sister’s names in perfect english.  She told me she was in her fourth year of school and pointed to the school house down the road.  She told me that the following year, she would have to leave her village to continue her studies.  I said goodbye and walked over to see their school.  As I walked onto the grounds I turned around and saw about ten children chasing after me.  They brought me to a wooden slide and a seesaw and we played until Jigme came to get me.  When we got back to the car, Barbara told us that some men working had asked her to remove her hat so they could see her curly hair, completely foreign to the people of Bhutan.

After many more hours of driving through lush mountains and valleys, we came upon the highest mountain pass in Bhutan, about 12,200 feet in elevation.  There was snow on the ground and hundreds of prayer flags hung above pictures of the king and queen.  After a few more hours we finally reached Bumthang, thus concluding our journey through the East of Bhutan.

In the morning we woke up and had toast with strawberry and plum jams homemade in our hotel.  We hiked to Jambay Lhakhang, the 101st of the 108 temples constructed by the Tibetan King Songsen Gempo in the 8th century.  Inside of the temple, two ladies prostrated themselves over and over as they chanted.  Jigme told us that they had been here every day for two or three years.  They would arrive at seven in the morning, break for lunch around noon and then continue until evening.  He told us that about 90% of Bhutanese people do this at their temple or at home after they retire at the age of 50.  Pemba stood in the corner, watching her and muttering a prayer under his breath.

We walked clockwise around the temple until we came to the room where three ladies and a monk prepared more than 1,000 butter candles.  Jigme told us that every evening these candles are lit and every morning the ladies clean them and make them again.  One of the ladies told us that she had been doing this every day for seven years.

We continued on the road until we came upon a family farming turnips.  We hopped a fence onto their property to photograph them and watch them work.  A young girl blew bubbles with her gum and let her sister pop them in her mouth.

We said goodbye and kept walking until we reached Kurjey Lhakang, a temple that held the remains of the first and second kings of Bhutan.  In the 8th century, Jigme told us, Syntha Gab came here to pray to a local diety before he went to battle.  The diety promised to help the king in the war, but when the king went into battle he lost his army as well as his 16 year old son.  The king was so enraged, he returned to Kurjey Lhakang and destroyed the house of the deity and said he no longer believed.  The deity felt insulted and became a demon, cursing the king and causing him to become ill to the point of death.

One of the kings secretaries had heard about the powers of the Guru Rinpoche and sent for him in Nepal.  The guru came right here, it is said, and retreated to a cave where he meditated 2-3 months.  Jigme showed us an indent in the rocks of the temple believed to be the body imprint left by Guru Rinpoche.  After his meditations, he transformed himself into 8 wrathful manifestations.  The demon hid in the stone for weeks, afraid to come out and face the Guru Rinpoche.  Eventually the king offered his daughter to the Guru, and he sent her to fetch water with a golden vase from the rock where the demon was hiding.  The sun hit the golden vase and the reflection shone into the eyes of the demon, transforming him into a snow tiger and forcing him out of hiding.  The Guru Rinpoche was able to subdue the demon, transform him into a diety and made him swear to protect the people of the valley.  Jigme showed us a cypress tree that is believed to be Guru Rinpoche’s walking stick, stuck in the ground as a symbol of his contract with the deity of Bumthang.

We returned to our hotel to get some sleep.  The following day we would set out for Trongsa, where we would begin our five day trek into the most remote village of Bhutan.