On our final day in Bhutan we woke up early to make the two hour trek up to Taktshang Goemba, more commonly known as Tiger’s Nest Monastery.  Legend says that in the 8th century, Guru Rinpoche flew into Bhutan from Tibet on the back of a tigress, a manifestation of one of his consorts, Yeshe Tsogyal, to subdue the local demon, Singey Samdrup.  He landed in a cave perched on sheer cliffside 2,700 feet above the Paro Valley floor.  There the Guru Rinpoche meditated for three years, three months and three weeks before continuing on to Kurjey Lhakhang in Bumthang and Gomphu Kora in Trashigang, spreading Vajrayana teachings as he traveled.  The Tiger’s Nest is thus held as the birthplace of Buddhism in Bhutan.

The Taktshang Goemba was constructed around Guru Rinpoche’s place of meditation in the 17th century by Gyalse Tenzin Rabgye and has since become the cultural and spiritual icon of the country.  During the high tourist season, the Tiger’s Nest can see up to one thousand visitors per day.  Every Bhutanese is expected to make the pilgrimage to Tiger’s Nest at least once in their life.  Our hike would be our driver Pemba’s 3rd and our guide Jigme’s 86th time ascending the winding stairway up the Paro cliffs.

Miraculously we found ourselves alone in the parking area at the bottom of the steep trail up to our destination.  The sole inhabitants of the Tiger’s Nest trailhead were three dogs who happily jumped up to join us on our hike.  Pemba chanted a prayer to Guru Rinpoche under his breath and stopped occasionally to fix prayer flags that had become entangled in the winds from the previous night.

We made it to the summit about a half-hour ahead of schedule.  We crossed a bridge over to the Tiger’s Nest cliff and underneath us roared a river that had half-frozen into snow due to the cold, high-altitude air.  There were prayer flags everywhere, hanging from trees that you cringed to picture someone climbing. We registered with the Monastery’s army guards and our guide Jigme provided the permit he had pre-arranged for us.  We stored our bags and cameras in lockers and walked through the entrance, passing under an image of the Rigsum Goempo, protectors of the three realms in Buddhism.  We passed a relic stone and Jigme told us to close our eyes, make a wish and walk forward trying to hit a certain spot on the stone.  I wished to come back to Bhutan and I made it on the second try.

Jigme took us through the temple grounds, describing in great detail the significance of each room as they related to the Guru Rinpoche’s meditation. We entered Pelphu Lhakhang, the room that houses the cave where Guru Rinpoche meditated.  The cave sat concealed behind a gilded door that is only opened once a year.  On the day that it is opened many Bhutanese people, including the king, will make the trek up to Tiger’s Nest to pay their respects.  We sat silently and meditated for a few minutes to soak in the energy of this sacred place.

We climbed a ladder up to the Guru Sungjem Lhakhang.  In the center of the altar stood a gold statue depicting one of the eight manifestations in which Guru Rinpoche appeared outside of the Tiger’s Nest.  Jigme told us that before a fire had burned down most of the temple in 1998, a statue had stood here that spoke to the man who carried it up to the Tiger’s Nest, telling him that he was the only one capable of making the long journey up the mountain with such a burden on his back.

We visited the adjacent temple where we peered down into a triagular shaped hole that legend says was created by the crown of the goddess Dorje Phagmo.  We finished with a climb to the mouth of the resting place of Guru Rinpoche’s tigress,  from which the Tiger’s Nest temple derives its name.

The air chilled to the point that we could see our breath so we began our descent back into Paro.  We passed tourists making their ascent with hiking poles or on the backs of ponies. As we passed they would look up at us with amazement. “You’re almost there!”  We would lie.  We stopped half way down to have tea at the Taktsang Cafeteria, perched beneath the temple and looking out over the Paro Valley.

We drove back to our hotel and visited Zhiwa Ling’s pottery studio, owned and operated by Yangphel Adventure Travel.  We met the potter who showed us his wheels and materials.  He took us to the painting studio where he had trained 17 young women to make natural paints and decorate his pottery with beautiful patterns and illustrations depicting scenes in Bhutan.  We went next door and visited another workshop where women made artificial flys for fly fishing, a popular sport in Bhutan and all of the Himalayas.

We said hi to our friends at the Zhiwa Ling and then Barbara and I headed over to the Amankora Resort for the massages that Barry had so generously gifted us for our birthdays. I had heard so much about the Aman International Resorts and I was excited to see the inside of such a unique and luxurious lodge for myself.   After so many hours of hiking and driving, a massage was exactly what I needed.  Our masseuses offered us hot water with lemon and honey and we changed into our robes. An hour later we returned to the lobby, refreshed and relaxed. In the lobby at the Amman we each had a glass of wine and toasted to the amazing trip that lay behind us.  The staff brought us salmon on toasts with a balsamic reduction, complimentary.  Someone in the corner began playing traditional songs on a lute.  The entire experience was heavenly.

Jigme and Pemba came to pick us up and brought us back to the equally lovely Zhiwa Ling Hotel.  Karma Lotey, the CEO of Yangphel Adventure Travel, was in the bar having a drink with Barry.  Barbara and I pulled up a chair.  We sat with him for a couple of hours, talking about our impressions of all we had seen throughout our journey.  Barry discussed his plans for his photographs and Karma told us that the best thing for tourism in Bhutan is for people who return home to somehow stay connected to the country.  Before we said goodbye, Karma gifted Barry and Barbara a beautiful plate depicting the Tiger’s Nest.  I received a plate depicting the eternal knot, “so that you remain forever entangled with Bhutan.”  I told Karma that definitely planned on it.

In the morning, Jigme called an astrologer to the hotel so that each of us could have a private meeting.  The Bhutanese consult astrologers before any decision is made or major endeavor is undertaken.   Astrologers help decide anything from where and when prayer flags should be hung to the date of a national archery competition or the coronation of the king himself.  I won’t go into too much detail, but I learned that in my past life I was the daughter of a demi-god who got tired of the war between gods and demi-gods and prayed to be reborn in the human realm.  I also learned that my present life promises to be happy if I pray to Varajnapani and choose a job that doesn’t cause too much of a spike in my blood pressure.  In my next life I will be the wealthy daughter of an entrepreneur so fingers crossed on that one.  I couldn’t decipher the book of marks and charts or the numbers on the wooden die the astrologer rolled to produce his insights and forecasts.  I did, however, buy a small statue of Varajnapani on my way to the airport. 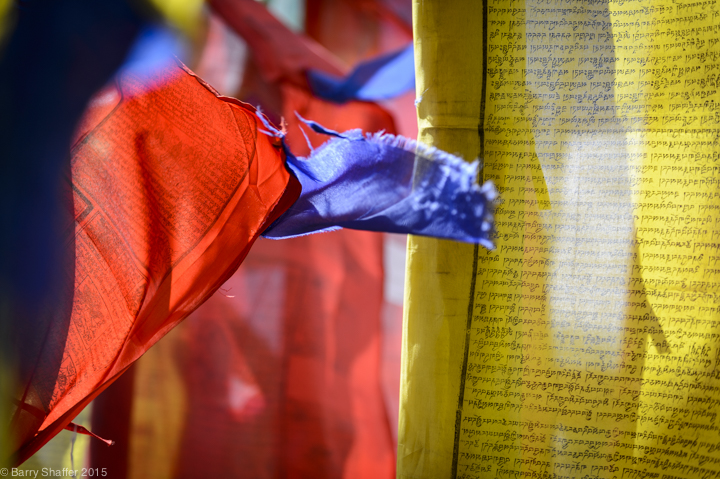 As we pulled into the tiny Paro airport, I was struck by a whirlwind of emotions.  There were times on this trip, when I was craving a hot shower in the mountains of Trongsa or listening to dogs howl outside of my window in Samdrup Jongkhar, that I found myself counting the days until I would be boarding this very flight back home.  Throughout this journey I have been excited to be in Bhutan but there were bumps on the road as there are when you travel to any place so different from your comfort zone.  But eventually–imperceptibly–those hardships blended with  so many happy moments to produce an experience that was truly unlike any other I’ve had in my 26 years on this earth.  I think Lisa Napoli describes this phenomenon well in her book Radio Shangri-La:

“The good, the bad and the strange combine to render Bhutan captivating and magnificent.”

Now, three weeks later, I stepped out of our Yangphel van for the last time and wondered where all of the time had gone.  I wasn’t ready to say goodbye to Jigme or to Pemba or to the warm, welcoming culture that I had found by accident in this tiny, happy kingdom in the Himalayas.  Pemba saw the tears in my eyes and when he hugged me goodbye he whispered, “visit soon.”  I knew I would.

To close out this blog, I would like to thank everyone that made this experience possible.  Thank you to Royal Druk Air and Tashi Airlines for sponsoring our flights. Thank you to the Tourism Council of Bhutan.  Thank you to Yangphel Adventure Travel for hosting us, providing our accommodations, building such an incredible itinerary and for providing the best possible team to take us through Bhutan.  Thank you to our trekking team for guiding us through the mountains with safety and efficiency. Thank you to both of our generous hosts on our farm stays in Tashi Yangste and Lhuntse.  Thank you to every single family that invited us into their home for tea or a cup of ara.  Thank you to Pemba for driving us across the winding roads of Bhutan.    Thank you to Jigme Reegyal for your exceptional guiding skills and all of the thought and energy you put into making our trip fun and unique.  Thank you to Barbara Shaffer for your pre-planning research and humanitarian efforts.  A huge thank you to Karma Lotey and Barry Shaffer for creating the idea behind this Photography Tour.  And thank you all at home and in Bhutan for reading this blog.  I’ve had a lot of fun.

Stay connected to us on Facebook and Instagram for announcements in the coming months.  Watch out for an Essence of Bhutan Photography show in Los Angeles in Spring of 2016 and for the publication of our photography book, the proceeds of which will benefit the Tarayana Foundation, a non-profit organization established by Her Majesty the Queen Azhi Dorji Wangmo Wangchuck working to uplift and enhance lives of vulnerable individuals and communities in Bhutan.

There’s no word for goodbye in Dzongkha so instead I’ll say Namey Samey Kadrinchila (Thank you beyond heaven and earth).