We said goodbye to our hosts in Tashi Yangste and hit the road.  After a few hours of driving, we pulled over to stretch our legs.  The road wound around a gorgeous valley and river to our left.  To our right sat high cliffs made of jagged rocks.  All along the rocks, someone had placed about a hundred tsa tsas, small statues made out of a mixture of clay and human ashes, created to honor the dead.  Pemba our driver picked up statues that had fallen and placed them back on the rocks and we followed suit.  We walked along the tsa tsa rocks until we found a small structure, modeled after a Hindu temple by one of the Indian road workers, out of which spilled another hundred tsa tsas for people to take and place wherever they like.

We drove for another hour or so before we came upon a road block, which isn’t unusual in the east of Bhutan where road construction is ubiquitous.  More than once we had frantically rushed to make it to a road block before the 15 minute window during which we could pass would close.  Our guide Jigme Reegyal informed us that if we missed our window we could be stuck on the road for more than three hours until the block opened up again.  This time the block only lasted for a few minutes while the road workers cleared some fallen rocks ahead.  We stepped out of our car to stretch our legs and were met with an enthusiastic and small “Hello!” from a young girl waving from a couple of cars ahead of us.  “Kuzuzangpo!” we responded and waved back.  We approached her car and met her and her five sisters, who told us they were on vacation from school.  When traffic began to move we jumped back into our car.  Ahead of us, the little girl leaned out the window and blew us kisses.

When the road block was cleared, we continued on the road until Barbara spotted some beautiful mustard fields in the village of Yadi, which translates to “high elevation.”  We hiked down onto the property of a local farmer and took some photographs of him and his family.  The Department of Water and Power drove by to collect bills and bought some cheese from the farmer’s daughter. 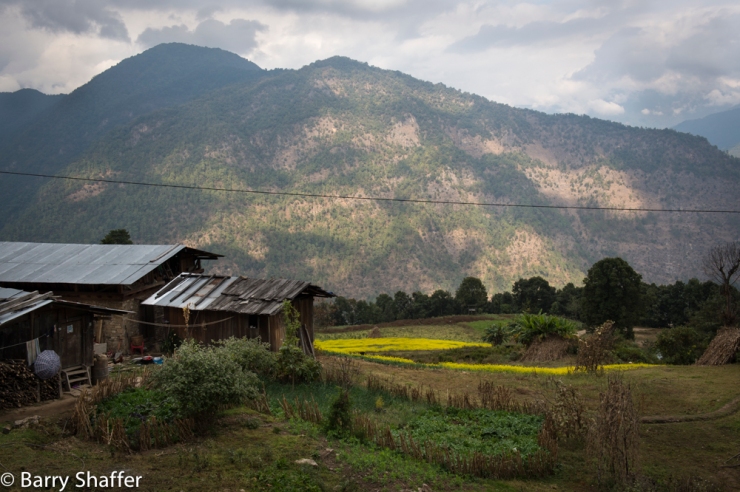 We walked around the village of Yadi until we came upon the Daphne Paper Factory.  The workers there showed us how they make parchment paper, the same process that the Tibetan monks used to make the paper on which they wrote scriptures in the 8th and 9th centuries.  When we returned to the car, Pemba had set up a table and chairs for us to sit and overlook the Yadi Valley.  Cars passed and their passengers all stared at three westerners sipping tea at a table in the middle of nowhere.

As we continued down the road, Barbara asked our guide Jigme how Gross National Happiness, Bhutan’s unique quality of life indicator that guides their economic policies and nation-wide development, affected the life of the family we had just met.  Jigme explained that from our visa tarriff of $250 per day, 60% goes directly to the citizens of Bhutan to build things like farm roads, schools and hospitals.  He told us that in the last GNH survey of the people of Bhutan, 91.2% answered that they were happy.  I asked how happiness is defined in the survey, and Jigme explained that the government goes to each district and asks people about their life.  If the person taking the survey has children, the government will ask how many of them go to school.  If they can afford to send all of their children to school, the government defines them as happy.  If they can’t the government will intervene and send them money so that their children can go to school.  If the person taking the survey is a farmer, the government will ask them whether they have enough land for their crops.  In this way, the government of Bhutan allocates their funds to help the people who are struggling to provide the necessities to their family.

We continued to talk about the definition of happiness, both in Bhutan and back at home in the states.  We discussed greed and the ways in which Buddhism brings contentment to one’s life.  We drove over a high mountain pass and Jigme made us shout “Lha Gyalo” three times, which translates to “may all the evil spirits be subdued by the gods.”  Before we knew it, we had arrived at Wangchuk Hotel in Mongar.  We went to bed early so that we would be well rested for the next day’s car ride to our homestay in Lhunste.

We woke up early the next morning and got back into our van, which had started to feel more like home than any of our hotels.  We stopped outside of town at a small market where children sold fruits and nuts for their families.

We bought oranges and peanuts from them and Barbara took some polaroids for them to keep.  They huddled around each other and shook their pictures, waiting for the film to develop and arguing over who would get to take the souvenir home with them.

We drove for a while before we met an older couple on their way to temple, pictured above.  They told us they were going to pray all day and that they had packed themselves lunch.   Jigme asked them to say a prayer for our safety on our journey and they promised they would.

We arrived in Lhuntse and visited the largest weaving center of Bhutan, which consisted of six or seven women and girls weaving in a small open-air hut.  The women sat at large looms, weaving incredibly intricate and complex patterns to make kira and gho, the national dress in Bhutan.  The more complicated patterns, Jigme told us, would sell for $3-4,000 US Dollars in Thimpu and would take up to six months to complete.  The weaver got to keep 30% of the sale and the remainder was split between the community.

We drove back to a stupa we had passed on our way into the valley to photograph it at sunset.  The stupa, Jigme explained, was built at the confluence of two rivers to balance out their energies.  108 small stupas were built around the larger stupa, a holy number in Buddhism.  A crematorium stood behind the stupas and a large sign read “No Meat or Alchohol Permitted Here.”

We arrived at our homestay in Lhunste and met our hosts.  We learned that here we were the first tourists to ever be guests in their house, and that their daughter, Nima, had spent weeks telling anyone who would listen that chipples (white foreigners) were coming to stay with her.

I went downstairs into the general store operated by our hosts and shared a Druk beer and sardines with five or six ladies from the village, unable to understand them but enjoying sitting and listening to their gossip.  When a new friend would arrive I said Kuzuzangpo and they laughed at me as they poured more beer into my glass.  I was called upstairs when dinner was ready and offered Ara, a local wine made from corn and full of boiled eggs.  It tasted buttery as I drank it and it felt warm in my belly.

After dinner we played with Nima and her older brother Tsuki.  We taught them hand games and they showed us a spinning top that they were very proud of.  We spent some time with the lady of the house and she sold us two very beautiful, hand-woven scarves.  They smelled like incense and the indescribable scents of a house in Bhutan.  We went to sleep early so that we would be well-rested for the ten hour journey to Bumthang the following day. 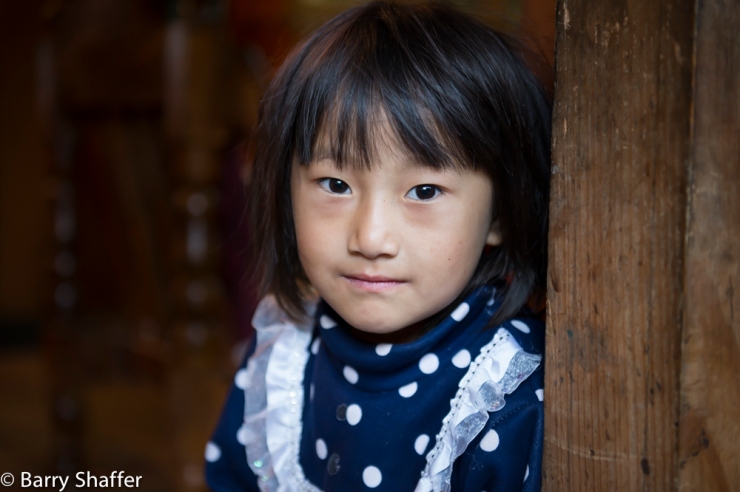