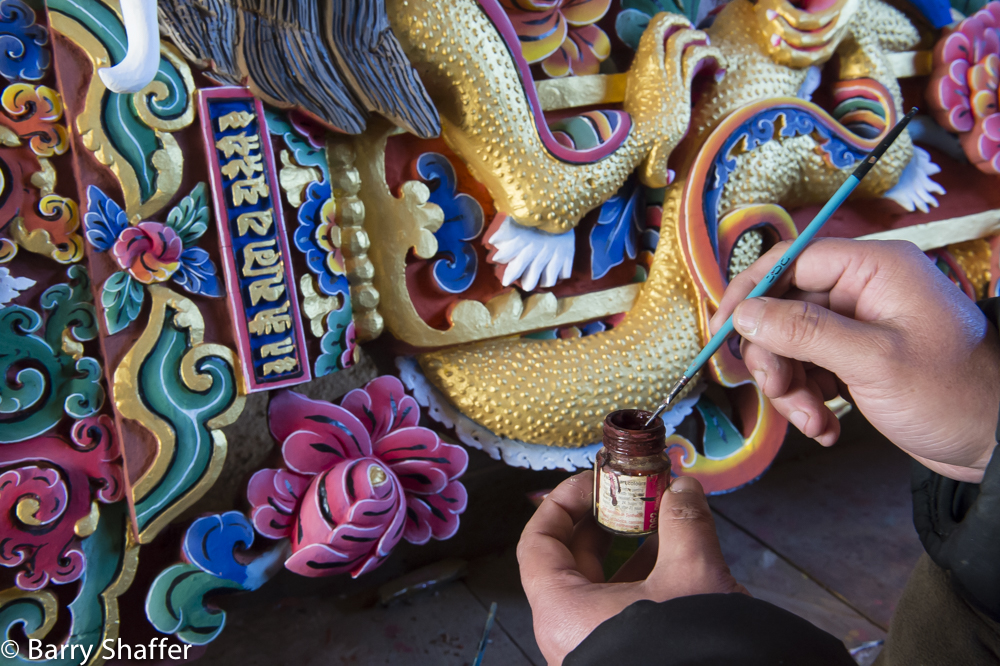 Our last night in Trongsa was Barbara’s birthday so our guide Jigme Reegyal and our driver Pemba surprised her with a birthday cake.  They brought it out and sang happy birthday with the staff of the hotel restaurant.  The cake said “Happy Birthday Barbara” in frosting and held a big pink candle shaped like a rose.  When Jigme lit the candle, the rose opened up into seven small candles shaped like petals and the center sparkled. Jigme handed her a gift from Yangphel, a book of short stories about Bhutan.  We ate some cake and retreated to our rooms for a very good night’s rest.

We left early in the morning and visited Chendebji Chorten, built in the 17th century to supress a demon named Nela Dheom.  Jigme told us that legend holds that a Tibetan lama walked to the Boadhnadh Stupa in Nepal, carrying a radish which he carved into a replica.  When he reached Bhutan, the radish had shrunk and and so the Bhutanese version was built about three times smaller than its famous counterpart in Nepal.

We set out for Phobjika Valley, down what felt like the bumpiest and windiest road yet, until we arrived at the Royal Society for Protection of Nature’s Black-Necked Crane Information Center.  There we learned that there were currently 248 cranes in the high wetlands of Phobjika and that at least 200 more were expected before the end of the month.  We watched a flock of cranes fly through the center’s powerful spotting scopes and learned about the amazing efforts the locals of Phobjika have undergone to protect the endangered species.  The birds are revered as a sign of good luck, and the locals have historically been fiercely protective over them.  Every year the cranes arrive in the first week of November, circling three times around the Gangtey Monastery before they land.  They roost here until March, signaling Spring and the harvest season and, it is believed, blessing the land for the harvest season. 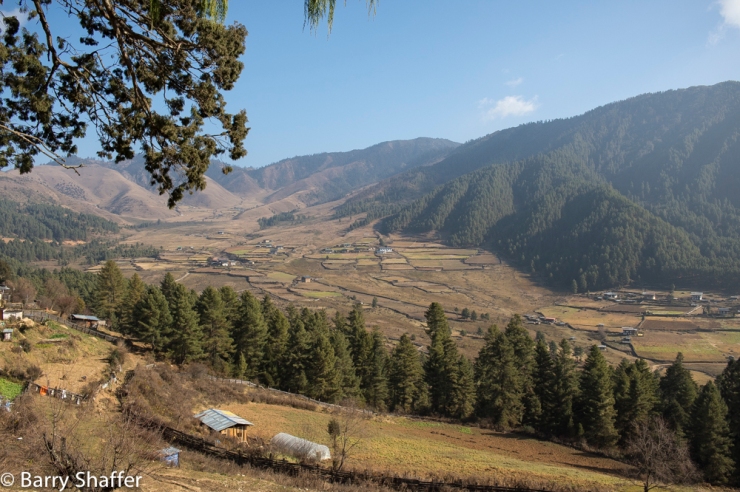 We had lunch and Jigme filled us in on a surprise:  Yangphel had booked us suites at the five-star Gangtey Goenpa Lodge for being such good sports on our trek.  Nothing could prepare us for what a wonderful gift a stay at the GGL would be.  We pulled up at the gate and were greeted with white silk scarves. 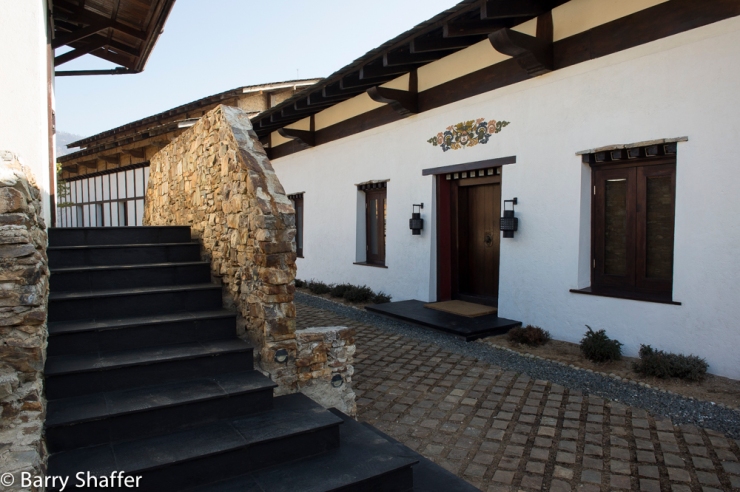 As soon as we walked in the door, Ateeb Shrestha, the General Manager of the GGL, invited us to remove our shoes to be cleaned and change into slippers.  As we walked into the lobby we were greeted with a welcome song sang by the entire hotel staff. Someone handed us a little scroll that contained the translated lyrics:

“It is a very happy day today

Which has brought us all together

We are here to give a warm welcome

To our honored guests

From both inside and outside

We were invited to sit down by the fire, where I was first able to take in the breathtaking lobby of the Gangtey Goenpa Lodge .  It is a big, open room with two fireplaces surrounded by large cushions.  The fireplaces looked out onto a balcony with sweeping views of the Phobjika Valley. 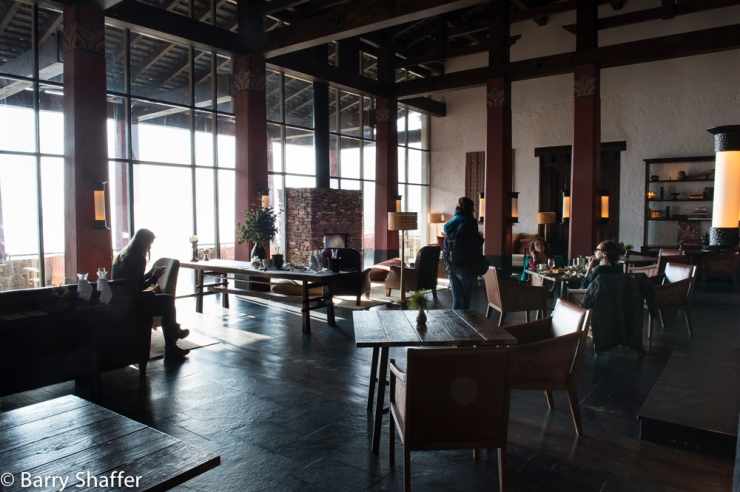 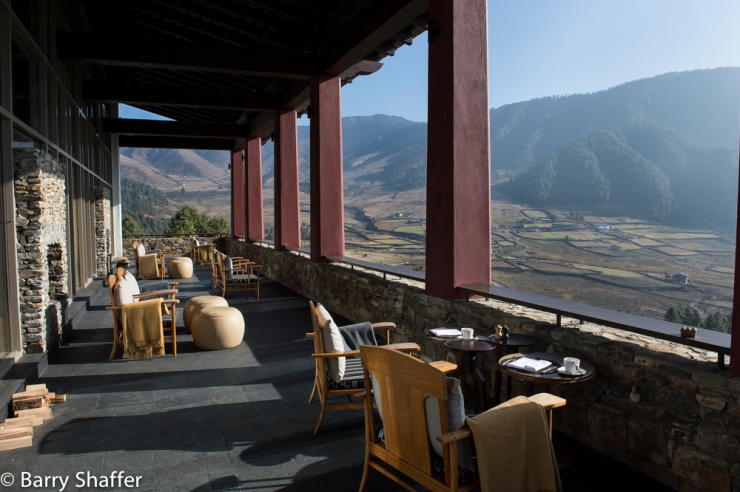 We were offered water and then approached by the spa manager .  He said he knew we had been driving for a long time down bumpy roads and offered us a complimentary shoulder massage.  He proceeded to give me the most necessary shoulder massage of my life.

Ateeb gave us an orientation of the hotel and wished us a wonderful stay. A young girl named Pema led me to my suite.  When I walked in I saw a clawfoot tub that sat against a window that overlooked the valley and the traditional architecture of Gangtey Monastery.  Next to the tub were candles and bath salts.  My bed was big and white and inviting and the room had a beautiful, wood burning fireplace.  The floors were heated (heated!) and the bathroom was full of heavenly scented organic bath products and soft, luxurious robes.  I wondered if I had died somewhere along the winding roads of Bhutan and was now in actual heaven.

Pema offered to wash some clothes for me, complimentary.  I resisted the urge to hug her and handed her my entire backpack.  She showed me that every light in the room had a dimmer “for your moods,” and told me to give her a call if I needed the fire lit or the floor temperature adjusted.  I said goodbye to my new best friend and jumped in the air and landed on my king-size bed.  Will you judge me if I tell you that I cried when my head hit a down pillow for the first time in two weeks?  Well go ahead and judge. Down pillows are a gift from the gods that I will never again take for granted.  Go home and kiss your down pillow tonight.

I thought about the shoulder massage I had just received and opened the menu of spa services.   I decided to splurge on a $30 herbal bath and a few minutes later the spa team was at my door with sweet iced tea.  They drew me a bath full of flowers and herbs that dyed the water a beautiful orange.  Next to the tub they left a small washcloth covered in ice for when I felt too warm.  I got in the bath and laid the cold towel on my face.  It smelled like lemongrass and mint. I stayed like that for an hour and a half, ocassionally looking out over Phobjika Valley and wondering how this could possibly be my real life.  When I called to have the bath drained and cleaned up the spa team offered to light a fire for me and literally put slippers on my feet.

I eventually managed to peel myself off of the comfy couch to join Barbara and Barry for dinner.  The food we were served reminded us of five star restaurants at home and yet all of the ingredients were locally sourced.  Barbara ordered a Yak Terrine covered in pickled apricots that will haunt my dreams.  I had Tibetan Momos filled with cabbage and onions and covered in a spicy pepper sauce.  Jigme ordered fried eggplant, our favorite dish from our trekking means, to our table as a suprise.  We ordered two scoops of ice cream to share between the three of us and instead received two scoops each.  No one complained. I returned to my room with a glass of wine and laid in my bed, occasionally tossing more wood onto the fire.  Eventually I drifted off into a deep, luxurious sleep.

We woke up in the morning and had breakfast.  There was homemade yogurt and I had bacon for the first time since leaving home.  There were homemade wild strawberry and pineapple preserves on the table and we were served homemade danishes and croissants.  Jigme came to get us so I returned to my room, considered the logistics of carrying a down pillow through Asia for the next two weeks, and said a sad goodbye to all of the inanimate objects I had come to love.  Do yourself a favor and contact Yangphel Adventure Travel to book a stay at the Gangtey Goenpa Lodge.

We jumped in the van and headed to the Gangtey Monastery, the 16th century Nyimgmapa structure that the Black-Cranes circle every year during their entry into Phobjika Valley.  The courtyard to the monastery was full of monks and puppies and crows squawked above us.  We watched a painter decorate new wood carvings (pictured above) for the temple’s renovations.

After visiting the Monastery we left Phobjika for Punakha Valley, home of Chime Lhakang, a temple built to honor Drupa Kinley, the Divine Madman as he is known throughout Bhutan.  The Divine Madman is famous for personifying the Buddhist tradition known as “Crazy Wisdom.”  He portrayed himself as a vagabond and wandered the countryside, teaching Buddhism by means of song, dance, alcohol and women.  He is believed to have brought 5,000 women to enlightenment by having sex with them.  Chime Lhakhang was built on a mound where the Divine Madmen subdued the infamous Dochula Demon, who had transformed herself into the shape of a dog.  Later on, a black stupa was built to show the burial place of Dochula.  To this day, Chime Lhakhang is referred to as “No Dog Temple.”

Women travel to Chime Lhakhang from all over the world to receive fertility blessings from the presiding lama with ten inch ivory, wood and bone phalluses.  They then carry a large wooden phallus and circle the temple three times clockwise. They choose the child’s name from a stack of bamboo papers kept by the lama.  All of the names begin with Kinley, after the Divine Madman.  His popularity is obvious in Punakha and Western Bhutan where many houses bear paintings or carvings of his phallus, believed to ward off the evil eye and malicious gossip.

We got back in the car and drove until we reached the Punakha Dzong, the second Dzong built in Bhutan and the seat of the government until Thimpu became the capital in the 1950’s.  The Punakha Dzong is widely held as the country’s most beautiful and it was the site of the royal wedding in 2011. It sits at the confluence of the Pho Chhu (father) and Mo Chhu (mother) rivers. 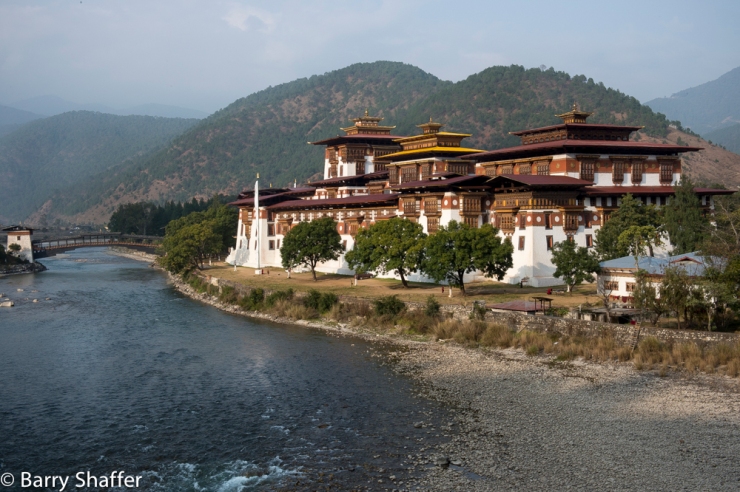 We drove back to our hotel and passed schoolgirls walking home in uniformed kiras and holding hands.  We checked in and prepared ourselves for the next day’s journey to Thimpu, the capital city of Bhutan.